To share your memory on the wall of James Hudson, sign in using one of the following options:

A receipt has been emailed to the address provided. A receipt may also be printed.

He was born on June 20, 1932 in Rochester, NY, the son of the late Willi... Read More
Dr. James William Hudson, age 87 of Corning, New York passed away peacefully listening to his favorite music, on Wednesday, June 26, 2019 at Robert Packer Hospital.

He was born on June 20, 1932 in Rochester, NY, the son of the late William and Wanda (Brake) Hudson. Jim received his B.S. and M.S. in Music Education from State University College, Crane School of Music, Potsdam, New York. Jim served in the Air Force performing on a weekly radio broadcast with his fellow singing airmen ensembles, the Sampsonaires and the Chord Dusters. He later went on to receive his DMA in Music Education from the Eastman School of Music, Rochester, NY. Jim married the love of his life, Bonnie Hooey on August 13, 1960. She preceded him in death on April 21, 2018.

Doc Hudson, as he was referred to by his students, was Professor Emeritus of Music at Coming Community College, where he was Director of Choral Activities for thirty-four years. Prior teaching experience included ten years in Corning-Painted Post Schools, where he wrote the West High School Alma Mater. He was active as a soloist in oratorio and masterworks, and as a clinician and adjudicator throughout the state. He has published numerous original works and editions. Jim retired from his position in 2016 after 47 years as Director of Music and Organist at Grace United Methodist Church, Corning. Jim was also a recipient of the Paul Harris Fellow Award.

Jim was a Life Member of ACDA and served as President of the New York ACDA, President of Eastern Division ACDA and as Assistant Chair of the 1999 Chicago and 2003 New York City ACDA National Conventions. He was active in the New York State School Music Association for 59 years, where he was Chair for Higher Education Two-Year Schools. He also served as President of the New York Association of College Music Programs. He was President and Vice-President respectively of local Civic Music and Corning Philharmonic Boards of Directors and was instrumental in the formation of Orchestra of the Southern Finger Lakes. He was also a member of Delta Kappa Fraternity, NAfME, NATS, Chorus America and is a Past President of the New York State Choral Directors Guild. Jim was a soloist for Robert Shaw, sang in the Robert Shaw Chorale and later, presented Shaw with an Honorary Doctorate from the Crane School of Music. He was Coordinator of Choral Groups for the Opening and Closing Ceremonies and Conductor of the 700-voice Liberty Chorus for the Statue of Liberty Centennial in New York City, July, 1986. An active member of Corning Rotary since 2003, Jim played piano for the organization, and loved “gigging” with both the Rotary Jazz Band and the Three Rivers City Jazz Band as their keyboardist right up to his final day.

Jim celebrated life to its fullest until his last day. His CD title track “I Love Life”, exemplified his positive outlook on living. His mantra “stay healthy” was how he typically ended a conversation, as he always graciously put others before himself.

Family and friends are invited to calling hours on Friday, July 5, 2019 from 4:00 pm to 7:00 pm at Phillips Funeral Home & Cremation Service 17 W. Pulteney Street Corning, NY. A funeral service will be held on Saturday, July 6, 2019 at Grace United Methodist Church, 191 Bridge Street Corning, NY at 11:00 am, Pastor Mike Kelly officiating. Service will conclude with full military honors at the church. A private burial will take place on Monday in the family plot at Chapel Knoll Cemetery.

To send flowers to the family or plant a tree in memory of James William "Jim" Hudson, please visit our Heartfelt Sympathies Store.

Receive notifications about information and event scheduling for James

We encourage you to share your most beloved memories of James here, so that the family and other loved ones can always see it. You can upload cherished photographs, or share your favorite stories, and can even comment on those shared by others.

Posted Jul 17, 2019 at 12:29am
I just saw this on fb. It saddens me. I had Dr. Hudson for Chorus, Theory 1 and 2, Music Appreciation, and a Madrigal group at West High '66- 68, then Chorus and Madrgals again at CCC for 2 years. I ended up with a degree in Mu. Ed. due in part to Dr. Hudson's phenomenal teaching, and talent. He will be greatly missed!
Thank you for the musical tribute.I listened thtrough to the last note.It was great hearing his wonderful voice again!
Comment Share
Share via:
SA

Posted Jul 08, 2019 at 01:26pm
Jim Hudson was a moving force for the NY chapter of ACDA. He was so pleasant to work with, unassuming and very organized! I recall stories of his preparations of the Chorus for the Statue of Liberty performance to celebrate the centennial. His voice was extraordinary, and his musicianship matched it. The Crane School of Music in Potsdam was rightly very proud of him, as are the alumni.
Sue Fay Allen

Posted Jul 07, 2019 at 04:12pm
My memories of Jim come from my time with him in Corning Rotary. One memory is that he was truly dedicated to being there every week to play sweet music for us throughout the early parts of the meeting. I can always remember the peaceful feeling that the notes gave me every time I walked in. It was truly a privilege to have known him and served with him in Rotary, and I wish to pass along my sincere condolences to the family in honor of a true gentleman and a special person who I will miss, and am much better for having known.

Peggy Dettwiler and Judith Nicosia purchased the Memories to Treasure for the family of James Hudson. Send Flowers

Posted Jul 01, 2019 at 10:22am
We are so very sorry for your loss. We are thankful that the OSFL had the opportunity to have Jim on our board of directors in the past and as a faithful supporter of the orchestra throughout the years. The OSFL concerts were significant to Jim. In this we carried out our mission to have enriched his life with beautiful music, and he took every opportunity to share that with others. May we all follow his example. We will miss him. --Karen Dusek, Managing Director, on behalf of the Orchestra of the Southern Finger Lakes, aka Corning-Elmira Musical Arts, Inc.
Comment Share
Share via: 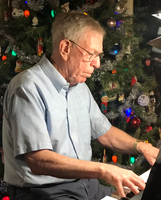 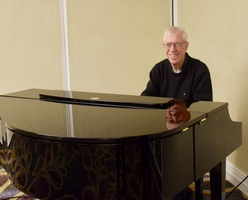 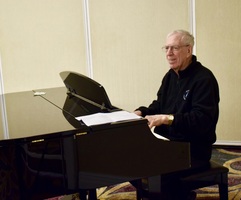 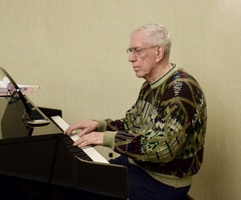