To share your memory on the wall of Ronald Anderson, sign in using one of the following options:

He graduated from Painted Post High and joined the U.S. Navy, serving his country in the Vietnam conflict and retiring after 20 years. Ron saw over 26 countries including a 6 month tour in Antarctica, and while stationed in Spain, his wife and three children joined him.

He was an avid bow hunter and fisherman, spending many hours on Seneca Lake with friends. He competed in Archery Tournaments for many years with his family. He tied fishing jigs and ran Ron's Jigs.

Ron was a lifetime member and past commander of the VFW in Dundee, NY, a member of the American Legion, and the Seneca Lake Duck Hunters Club in Penn Yan, NY.

In addition to his parents and his wife, Ronald was predeceased by his daughter, Tammi Jo Anderson Dignon in 2006, and brother, Gary Anderson in 2018.

Friends and family are invited to attend a graveside service with military honors at Bath National Cemetery on August 23, 2019 at 11:00 AM for Ronald and his wife, Jean.

His family would like to express a sincere thank you to all the staff of the Bath VA Community Living Center, Bldg 104, Wing D for all the special care and love they showed our father in his time there.

To send flowers to the family or plant a tree in memory of Ronald Ralph Anderson, please visit our Heartfelt Sympathies Store.

Receive notifications about information and event scheduling for Ronald

We encourage you to share your most beloved memories of Ronald here, so that the family and other loved ones can always see it. You can upload cherished photographs, or share your favorite stories, and can even comment on those shared by others. 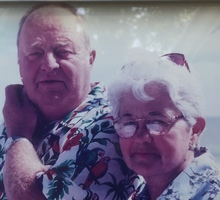